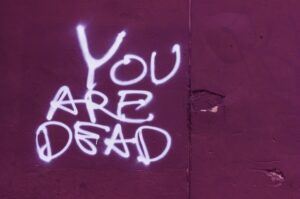 If you or a loved one were charged with terroristic threats in Michigan, you should speak with a criminal defense lawyer. They can help ensure you know your legal rights, including how you could avoid a conviction. Law Offices of Ravi R. Gurumurthy, PLC has extensive experience defending people that are accused of crimes, including misdemeanors and serious felonies. We are here for you. To learn more, contact Law Offices of Ravi R. Gurumurthy, PLC, for a free consultation by calling (231) 577-1580 or contacting us online.

You’ve probably read about the school shooting in Oxford, Michigan, in November 2021. Four students died, and many more were injured when a student brought a gun to school. Each time a school shooting occurs, the public’s attention seems to renew a focus on rhetoric posted on social media or apps or online. Michigan law, known as the Michigan Anti-Terrorism Act, makes it a crime to utter threats of violence or to report an act of terrorism falsely. Although it extends beyond school-related issues, this law provides the state with a tool to address online rhetoric and rumors involving school threats.

If your child has been accused of violating the Anti-Terrorism Act by making terroristic threats or falsely reporting an act of terrorism, retaining a knowledgeable attorney to defend against these felony-level charges aggressively is imperative. Your child’s future may depend on the skills of your attorney.

What Is The Michigan Anti-Terrorism Act?

It is essential to understand that the person can be found guilty even if they lacked the ability or intent to carry out the threat. These acts carry consequences of up to 20 years in prison and a $20,000 fine.

What Is An “Act Of Terrorism”?

An “Act of terrorism” involves a deliberate act that:

Under the Michigan Anti-Terrorism Act, even threatening to commit such an act is a felony, even if the person making the threat lacked the ability or intent to carry out the threat.

Law enforcement and schools pay special attention to social media and messaging application content. Teens tend to express themselves freely on Facebook, Messenger, WhatsApp, Instagram, Snapchat, and Twitter without realizing that these posts can be retrieved even if deleted. Unfortunately, even a poorly worded, seemingly benign post can be interpreted as a threat in today’s climate. Under the right circumstances, slang phrases, off-hand remarks, and even song lyrics can be pointed to as potentially threatening. Words posted in anger, bravado, or even jokingly can come back to haunt your child. Criminal charges can be pursued even if the post is deleted, and it does not matter how many views or likes it received.

There is frequently very zealous prosecution, and at times over-reaction, to these types of posts. For this reason, quickly engaging a savvy attorney to mount an immediate and emphatic defense can protect your child from significant consequences.

What Other Charges Can Be Filed?

In addition to making terroristic threats, charges such as using a computer to commit a crime or threatening to use a firearm (or other weapon or explosive) on school grounds can also be brought. Your child may also be charged as an adult if the prosecutor believes the facts of the case warrant it.

Retaining a Michigan attorney as soon as possible if your child is or may be charged with terroristic threats can enable your attorney to examine the facts of the case and compose a defense strategy. These can include aggressively challenging the state’s case by, for example, demonstrating that the supposed threat was not actually a threat, or arguing that the facts of the case do not rise to the level that warrants incarceration. Also, if charged as an adult, a persistent attorney may be able to have your child placed on probation under the Holmes Youthful Trainee Act. The HYTA allows qualified offenders who complete probation to have their charges dismissed. If your child faces charges of making terroristic threats, please call The Law Offices of Rami R. Gurumurthy at (231) 577-1580 today to schedule your free consultation.

By Ravi Gurumurthy | Published May 16, 2022 | Posted in Criminal Defense | Comments Off on Terroristic Threats In Michigan Schools